AND NOW IN THE POTENTIAL CONE OF JOSE: NEW YORK CITY.. BOSTON..? JERSEY?

It is amazing to consider how long Jose has been floating around the Atlantic Ocean. He formed some time shortly after Irma did 5000 miles ago.. and he tailed behind her as she took center stage in the islands and America.. 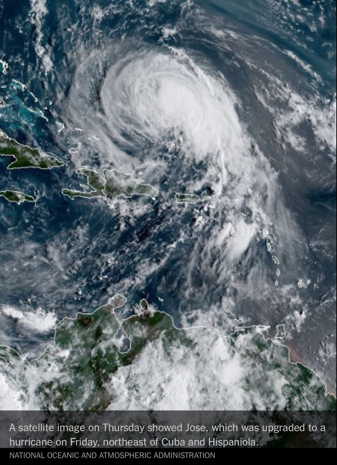 Since her escape from the United States across the North Atlantic, Jose has wobbled and bobbled, turned into a tropical storm and recently has been upgraded to a hurricane again.
The stats:
As of 0500 AM EDT Sat Sep 16 (Advisory # 44)
Saffir-Simpson Wind Scale: Category 1
Maximum Sustained Winds: 70 knots; 80 mph
Minimum Central Pressure: 983 mb
Located at: 27.9N 71.8W
Movement: northwest at 8 knots; 9 mph
And now it appears that Jose has finally chosen a path .. he will travel to the Northeastern part of the United States and potentially have a landfall near Jersey or NYC.. Maybe even Boston.. The storm is expected to stay around a Category 1 or below as it will be in considerably colder waters than it is now..
But strength aside, the storm is expected to blow up into a monster when you consider the mileage and landscape it will encompass. Just as Sandy did in 2012, Jose is supposed to blossom into a massive Nor’Easter-ish type storm..
Anyone from North Caroline north to Maine should be on guard for this situation and prepared for an either glancing blow or a direct strike…