A year of nothings: Sandy survivors see no path home.. still, one year later..
It is actually pretty hard to believe that it’s has been a year already since the massive Superstorm hit..Should you be interested, there is some archived information from last year on both THE HORROR REPORT and my personal website Coalspeaker .. One year since those winds destroyed and those floods killed.. A year goes by fast–but for those who still see no sign of recovery, it must have been a very, very long year..
Winter 13-14 Nor’Easters could spell disaster for Sandy victims..

The latest from St Jude: 15 dead.. That was another historic storm, one year to the same time frame that Sandy struck the North American continent..

The sun has suddenly become active: More big flares are firing off.. And maybe some more to come.

Just in time for the holiday season: Food stamp cuts. And a Food Bank CEO suggests that those cuts could spark food riots..

A report claims that milk prices could skyrocket to $8 a gallon is farm bill is not passed..

Obama knew that millions of Americans would not be able to keep their health insurance..

Grill on the Hill: Sebelius testimony at Congressional Hearing about Healthcare.gov glitches..

The Cardinals’ plane grounded with mechanical problems.. That curse that used to be over the Red Sox doesn’t have a home anymore. Every team that plays them better watch their bats..

Girl kills herself after her parents ban her from Facebook..

This is a bizarre idea.. The United Nations is planning to fight asteroid with “Committee on Peaceful Uses of outer Space” .. And just in case that plan doesn’t work, the big shots in big leagues have their backup plan for the 1%: The artic bunker with a doomsday vault featuring every seed from everything on earth. Yes, mankind will persevere.. even if 99% get wiped from the planet..

Why are you (*am me*) always tired? A website gives us some ideas.. They include not drinking enough water, being low on B12, or lots of other possibilities. What about just getting four hours of sleep a night, I did not see that one on the list..

A woman believes that she was healed by a ghost, and also goes on to claim that she has a photo to prove it..She said that the ‘White Lady’ in a church during a family summer holiday.. Does this photo prove that a ghostly angel may have assisted in healing someone, or is it proof that ‘mind over matter’ is stronger than we think? 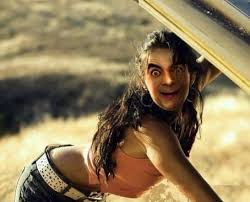 Religious scholars join horror movie buffs in St. Louis for another look at the film THE EXORCIST..

Samhain set: Witches are the most popular costume in 2013, princesses for kids. Not making the list: The TEENAGE MUTANT NINJA TURTLES. I frankly think they were the most popular this year, since we could not find any for my son in a 100 mile square radius. I guess the best gauge for that will be so see if any heroes in a half shell end up joining Ayden in night life trick or treating..