There’s immense magic in the second season of Stranger Things.. magic you have to experience to believe 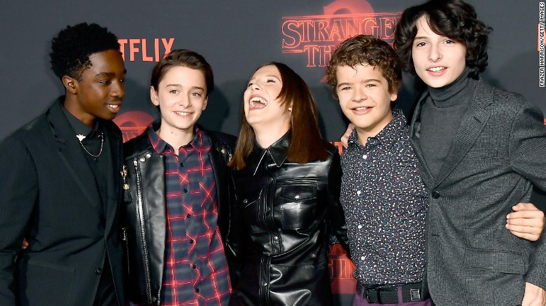 To put STRANGERS THING 2 (ST2) into a condensed few paragraphs would not be proper.. not be decent. It would just flat out not work..
ST2 continues to take us deep to the heart of a seemingly cursed Illinois town.. to their school, their arcades. Their stores. In the deep and dark 1980s as well. Reagan/Bush signs litter yards—with the exception of one lonely Mondale sign halfway through the season. The imagery, music, and colors are all reminiscent of my time growing up in the 1980s. It was such an homage to the dangerous decade, when we feared the Reds and allowed big government disguised as a smaller version of itself run wild with defense contracts, military spending, and yes secret projects in labs right beneath our noses.
ST2 is very interesting. It is so different from the first season on Netflix, but yet somehow retains its amazing attributes that brought it the initial success. The character development is amazing.. we see the kids age through the season.. we feel like we are growing up with them. Mad Max is an amazing new character, along with her juvenile delinquent brother who seems more hell bent on hurting than saving his sister..
Mike misses Eleven.. Eleven misses Mike. Despite the fact they’re closer than they think.. Eleven grows with her travels. Without releasing spoilers, just know the episode dedicated to only watching Eleven’s life may be worth spinning off a new series all in itself!
What I loved about ST2 is the more things changed the more they stayed the same.. as the children grew into younger adults, there were certain scenes that paid respect to the first season youth and indiscretion.. Whether it was playing SHOULD I STAY OR SHOULD I GO NOW or coming up with a colorful new description “Demo-Dog,” it was well-done. We saw ALL of the kids’ families this time, most likely because fans decried the notion that we didn’t mean them in season 1. Barb’s dad was of particular humor. Later in season 2, there is one rather hilarious scene involving Mike’s mom, post bath, answering the door while her inept husband loudly snored on his Lazy-Boy.
Hopper was a strange villain-ish hero in this season. Exactly the way we like him.
Dustin did not realize how screwed up his actions could make things… Steve Harrington didn’t realize what a swell guy he could be!
I want to keep my emotions in check .. While I don’t want to ruin much for people, just take a good long hard glance at the images that Will draws while he is seemingly possessed by his trauma and Upside Down demons.. The giant spider, which has been visibly seen in the trailers, makes another appearance..
That scene makes me hope for a season 3. Although by then perhaps it would be just too much?
When episode 9 ended after the binge fest of STRANGER THINGS, I become emotional. The final scene made emotions swell… Viewers were most likel reminded of their childhood. Their coming of age moments. It just turns out that the gang of friends from STRANGER THINGS have moments that involve government spies, evil monsters from the underworld, and powers beyond our imagination.
There is magic in this show. I believe that. Season 2 continues the magic and spices things up to levels that your mind will be reeling at.
No more to say to you except: WATCH THE SHOW if you did not already. And if you did, watch it again.