The internet firestorm over the sudden closure of the Sunspot Solar Observatory went worldwide within the last 10 days.. 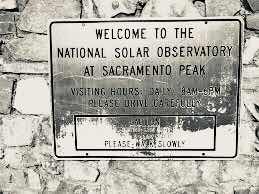 As of yesterday, there was finally an official statement of some form as to why. But the statement is not going to end the rampant speculation — these types of events get their fodder from “official statements” that fail to answer directly reasons why events occurred.

The group that manages the Facebook page for the New Mexico facility say they are cooperating with on an ongoing criminal investigation..

The Association of Universities for Research in Astronomy said “we became concerned that a suspect in the investigational potentially posed a threat to the safety of local staff and residents. For this reason, AURA temporarily vacated the facility and ceased science activities at this location.”

AURA said it was their decision to vacate…
The sheriff in town offers a different opinion, of course.. initially when the facility closed Benny House told the press that the FBI shut the facility down.. The local police and media reported Blackhawk helicopters circling the area and “a bunch of people and work crews” with antennas..

In traditional FBI protocol, the agency is not confirming or denying an investigation.

The facility is reopening.. but the theories are not ending.

The whole event has the feel of a true life X FILES episode in action.

The real version, not fiction.