As I write this, Japan and parts of Russia are already greeting 2014.

I recall how news stations covered the millennium changeover back in 2000…they covered each nation live–even though 2000 didn’t even start a new millennium!

And worst yet, everyone with stockpiles of soup and water exited their bunkers on January 2 to find the world was still there.. crazy, insane.. but there..

You have heard enough of the year in review laments by now.. the best and worst.. the nice and bad.. Even the HORROR REPORT gave you our annual review of what we thought mattered –and didn’t–over the previous 12 months..
It is interesting that we do this, too.. That one day, New Years day, can mean so much of a difference to us..
The most meaningless place I think you can be tonight is a dive bar.. cowered in the smoky corner –wait can you still smoke in them!?–listening to some awful band try to recreate magic from 1970s tunes… After the party streamers and noise makers get thrown to the side, you’re still in a dive bar. You’re still in a bad place for your spirit and soul. Believe me, I spent some New Years in dive bars. One in particular when I was in my early 20s and either had too much to drink or got sick from the buffet turkey meat that they served at midnight..
Tonight my new years will be quiet.. My wife and I have dinner tonight at one of the most wonderful restaurants in the world, Martin’s in Hazleton, PA.. After that we will come back home and relieve our babysitter of her duty of watching Ayden watch Woody Woodpecker on Netflix. And then watch a new years eve rock without Dick Clark but with Ryan Seacreast. At 11:59 Seacrest will announce ’13 out’ and we will sing, dance, and kiss our loved ones as the manmade calender switches to a new digit..

And that is how we do it, here on earth. For those keeping track in space above… we celebrate a year that was and make promises to ourselves for the next. And yes, by February those promises are long gone memories .. sometimes by January 2 they are, as a matter of fact..

For the first time, this year, I plan on resolving a few things.. A personal set of mental ailments and roadblocks that have hindered my advancement as a human for a long time… those I want to rid myself of. I am going to attempt to have a clean slate.. and attempt to forge a new path of hope and change. No, I am not running for president. Instead, I am attempting to succeed in this world, change some lives for the better, and add love instead of hate to a planet that is filled with the noise of evil …even though it’s overrun by the quiet of purity and morality.

I hope you stick to your resolution, whatever you choose for it to be.

This is how Japan does things; They are recruiting the homeless to help cleanup radioactive Fukushima! And with the new law that passed there, don’t expect many Japanese news agencies to report a word of this..

Former MSNBC host Cenk Uygur was told not to warn the public about the danger posed by the meltdown at the Fukushima nuclear plant during his time as a host on the cable network.

This could be trouble: The levee around Assumption Parish sinkhole is cracking again..

Big buildings in Santa Monica and LA may sit atop quake faults..

Heartbreaking drama continues over girl who was declared brain dead..
…to remain on ventilator until January 7..
…court blocks hospital from disconnecting life support of Jahi McMath…

There are some good people in this world.. Strangers Donate More Than $70K for Girl’s Life-Saving Surgery..

The world continues to watch the ship rescue attempts in the Antarctic.. there has been another setback..
It is certainly noteworthy that the scientists who are STUCK IN THE ICE were there trying to prove sea ice is melting due to global warming..

A worthwhile question: What happens to comet Ison’s remains? Fringe conspiracy sites tell us the end is nigh and that the remnants are going to strike earth in fast motion.. We know better. but what about those chunks and clunks remaining of the comet that never was? There is no logical reason to panic about the trail of debris..

BUT..
While not associated with anything related to Ison, this is an interesting story nonetheless.. The midwest saw a fireball last week. There has been an assumption that the fireball in the sky was a meteor–but that is not really an agreed upon conclusion! At this point a remains a mystery.. And speaking of fire in the sky.. here’s another story on the Midwest fireball show: This is a video and image of what happens when a meteor falls from the sky above..

Stunning new information is revealed about how the NSA tracks your phone.. Perhaps it’s why your cell battery dies so fast..?

Brain like computers are learning from experiences.. The OBSOLETE MAN.. not just a Twilight Zone episode anymore..

One third of Americans reject the theory of evolution..

I bet this man rejected evolution, too: Man Ran Through Bingo Hall with Pants Down Yelling ‘Bingo!’

The new America: Driver arrested not for having drugs, but for having an empty compartment that could potentially store them!

Drive by shooting near the White House..

Hands of the future: Do you have iPosture or text claws? 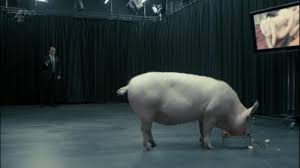 A friend of mine who I trust concerning entertainment tells me to check out BLACK MIRROR: THE NATIONAL ANTHEM.. I just may.. he said the first paragraph of the linked story would hook me.. the paragraph on the Avclub.com ends oinks..err…ends like this: “The premise is devastatingly, horrifyingly simple: A member of the royal family, Princess Susannah (analogous, one imagines, to Kate Middleton) is kidnapped and held hostage. Her freedom is guaranteed on one condition: The prime minister must have sex with a pig, live on national television”. There’s more.. but I bet you’re hooked to.

Kevin Smith getting ready to direct another horror comedy about the rapture..

First look at images of FEAR CLINIC with Robert Englund..

And perhaps the most positive piece of news to end the morning roundup: A new study confirms that spirituality can actually improve the brain. So go out, be positive.. be spiritual.. and attempt to connect your soul to a great force.. Whatever the force is you choose to accept.. It’s probably all the same in the end, anyway.