Some protesters said they planned to disrupt the Rockefeller Center tree lighting — following a decision by a grand jury not to indict an NYPD officer involved in the apparent chokehold death of Eric Garner.

There is high tension on the streets of New York tonight.. only days after the Ferguson grand jury decided not to charge Darren Wilson, this new story emerges from Staten Island..

The grand jury was able to even see the video in which police held down a dying Eric Garner.. his crime was selling loose cigarettes and force of several police officers killed him, as he begged for air before his death.. Garner’s crime was tax evasion.. In a sense, it’s fair to say that Garner was executed by the state for the failure to relinquish tax dollars to the city..

There are people on the TEE VEE sets tonight defending the police and the grand jury non-action.. there are also some demanding more protests.. And the rest of us, the silent majority, are looking on in wonder and sadness.. Sadness over police who go too far.. sadness over a country seemingly becoming disjointed by racial tension and needless division—if only the majority of all races would see how bankers and various high powered institutions of corporate madmen are actually the ones who herald in a police state. The big picture, though, is often difficult to see..

The night air in New York is not filled with Christmas joy, but instead the anger of people who sense more police tyranny

There is one more piece of food for thought on the Eric Garner death.. consider this: The police who killed him this summer will face no criminal penalties for their actions. But 22-year-old Ramsey Orta was indited in August.. Why? Well that is the interesting part.. RAW STORY reports:

As the Staten Island Advance reported, 22-year-old Ramsey Orta was indicted this past August, 13 days after being arrested and charged with charged with felony counts of third-degree criminal weapon possession and criminal firearm possession.

Authorities argued that Orta stuffed an unloaded gun inside 17-year-old Alba Lekaj’s waistband outside a hotel. But Orta has said that the charges against him were trumped up as retaliation for filming Garner being grabbed from behind by Officer Daniel Pantaleo. The city’s medical examiner determined that Garner’s death was a “homicide by chokehold.”

“When they searched me, they didn’t find nothing on me,” Orta said to the Advance regarding his arrest. “And the same cop that searched me, he told me clearly himself, that karma’s a b*tch, what goes around comes around,” Orta said, adding later, “I had nothing to do with this. I would be stupid to walk around with a gun after me being in the spotlight.”

And now tonight, with the seasonal good tidings gone by the wayside, the crowd in New York City is shouting ’no justice no tree’  in the cold night air.. During the heat of the summer, a man named Eric Garner was shouting “I can’t breathe” as police held him down for not giving the city his taxes on loose smokes.. 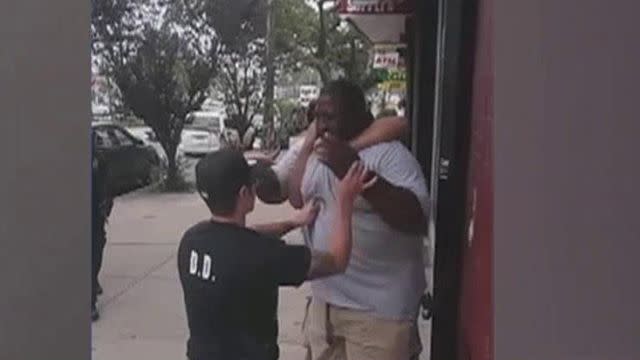