The horror film ‘mother!’ Is getting high praise from noble media affiliations. It is also being billed as an intellectual horror flick with a message.. religious overtones.. social justice ramifications. 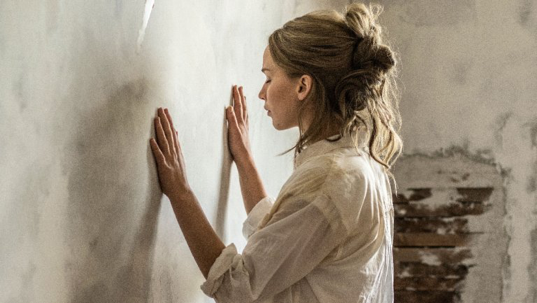 Let’s unpack this..
The HOLLYWOOD REPORTER (http://www.hollywoodreporter.com/heat-vision/jennifer-lawrences-mother-marks-new-turn-year-prestige-horror-1039071) opines:
Taken purely on its surface, the film is about the horror of hosting ungrateful houseguests. Going beneath that surface, it’s about gruesome male narcissism. Ignoring its text and subtext entirely though, mother! is something more ambitious: A herald of prestige horror at a moment when we might actually need it. It’s September, the calm before the dizzying storm of awards season self-aggrandizement, when we stop thinking of movies as works of art and start thinking of them as show horses; we sacrifice the substantive power of movies in this stretch of the year, focusing instead on making predictions, playing the odds and analyzing marketing campaigns. mother!’s theatrical release falls just on the cusp of celebratory madness, three months earlier than Black Swan’s back in 2010. But both movies screened at the Venice International Film Festival, often treated as the start of the Oscar race by pundits; both movies star esteemed, in demand lead actresses, the latter Natalie Portman, the former Jennifer Lawrence.
X X X
VULTURE has a report on this too .. And they go deeper into the shock scene of an infant being eaten. And they really work hard but find a reason to praise it..
From their report:
http://www.vulture.com/2017/09/lets-talk-about-the-ending-of-darren-aronofskys-mother.html
Aronofsky is no stranger to shock value, having given us such moments as Winona Ryder stabbing herself in Black Swan, the main character giving himself a lobotomy in Pi, and the infamous “ass to ass” scene in Requiem for a Dream. But killing off a newborn, even a CGI one, is a big leap for him. Baby murder is generally off-limits in cinema, and witnessing it triggers your lizard brain’s instinct to protect young life, making even the most hardened stomach potentially churn. It perhaps fits with the environmental and religious metaphors of the film (which we’ll get to in more detail in a minute) by showing the ways in which mankind destroys that which is most precious to us. But there’s also a solid argument to be made that it was a gratuitous attempt to inflict something memorable at the cost of good taste.
X X X
I am a fan of the unwritten but prescribed rule of leaving graphic scenes OUT of movies involving children.. “IT” was a little much for me even during the opening sequences, but I get it. The movie had to focus on Georgie first.. but still.
The NETFLIX hit “CLOWN” ? ,That movie went too far for me, as well.
Call me a wimp .. But I have an idea of then type of horror film I like. Less blood. More store. Less cautionary problems for vision, but mental fear and distress..
But mother!? This is my take, without seeing it:
Basically it is a snuff film. Pornographic and violent. Suitable only for degenerates who pretend to be intellectuals. Absolutely horrible and vile. And that is it.
Now before I go deeper into a category that will cause my own impunity and commentary of being a boring and tired no-name who shouldn’t even have a voice at all with my audience, let me offer a counter point that many of you may already agree with before reading. From the VULTURE article, a comment, a defense of the movie and the anti-religious message, and the baby eating scene:
“They kill the baby, Him says to forgive them, the creepy priest says he’s not really dead, the worshippers put his carcass on an altar and ceremonially eat his flesh. Remind you of anything? The baby is Jesus, eating him is the Eucharist.
The movie is a brief, ugly history of humanity culminating in the whole thing blowing up with the help of some fossil fuels in the basement. You’ll laugh, you’ll cry!
I thought it was a wild trip and I didn’t even get the Mother Earth thing until later. In retrospect, I think it makes sense. But it’s also a dark portrait of religion as practiced by the masses of Him’s fans/worshippers. Him’s beautiful scripture is perverted in their hands. Sharing means stealing, love is cannabalized for cheap comfort, and supposed Christians behave in every awful way people have done and still do in a thrilling cinematic tableau worthy, as others have said, of Hieronymus Bosch. All the while, horrified mother (earth) and her house are abused and Him (God) pleads for patience.
It must also be a dark portrait of the artist/muse dynamic. In this layer of the metaphor, Him is more of an a-hole, a wannabe God. He can’t just create. He relies on the adoration of his muse — whom he only loves for that adoration. Her love is symbolized by her heart, which calcifies in the apocalyptic furnace along with her body, leaving behind a delicate glass rock containing the force with which he will start again — this time, with a new girl. The old one’s dust, remembered and valued only for her love of Him. Not sure he’s trying to say sorry to an ex here or what, but the Great Artiste comes off as an all-consuming narcissist in this telling.
Don’t buy the reviews that say it’s very disturbing. I find mere trailers for ordinary horror and action films more upsetting for their blasé callousness. Ed Harris and Michelle Pfeiffer as a hilarious chain-smoking Adam and Eve are worth the price of admission alone.”