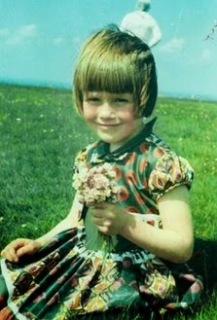 Could it be? An old mystery from last century solved? Will this finally put the story of the Solway Spaceman to rest? Logic and science and common sense solving one of the most famed UFO and paranormal photos of all time?

We know this about the photo:
Jim Templeton took the image of his daughter in 1964. A strange white figure of a man who appeared to be in a space suit was visible behind her..
According to the story, Templeton took the image to police.. they said it was nothing out of the ordinary. He sent it to Kodak, which reportedly said the image had not been altered or tampered with..
And finally, according to lure, Men in Black, “Number 9” and “Number 11”
showed up and talked to Templeton about the photo.. One aspect of the story that I actually was not aware of is reported by the BBC:

Perhaps the strangest turn of events was a link to the planned launch of a Blue Streak missile in Woomera, South Australia.
Just days after Mr Templeton had taken his photograph, that missile test on the other side of the world was aborted by technicians who reported seeing two men in the firing range.

That is a little creepy, perhaps. All of it is, really.
The BBC has more, though, and interviewed an expert who attempts to finally solve this old mystery with a logical conclusion. Dr. David Clarke met the Templetons, the BBC says.. Also this: Clarke does not think the image is a hoax or purposely fake. Instead, he thinks the spaceman is actually Templeton’s wife..
This:

“I came away absolutely convinced he was telling the truth and couldn’t explain it himself, although I was less convinced about his ‘Men in Black’ story. Whoever it was who visited him, I don’t think they were from the government.”
However, the spaceman, Dr Clarke says, is almost certainly not anything of the sort.
“One of the other stills [taken that day] shows Jim’s wife who, according to him, was standing behind him when he took the photo of Elizabeth,” he said.
“I think for some reason his wife walked into the shot and he didn’t see her because with that particular make of camera you could only see 70% of what was in the shot through the viewfinder.”
Annie, he argues, was standing with her back to the camera and the photograph was over-exposed – causing her blue dress to look white.
Whatever the truth, for Dr Clarke it is a reminder of a more “innocent time” and he is in no doubt about its importance.

Could that be it? A simply solution to the story.. An ending to what has been a part of UFO lure for decades? Just a woman in a white dress.. over-exposed in color and a product of an early came in an innocent time..
Interesting way to conclude it all..
Are you with Dr. Clarke? Are you of the opinion that this is solved, over and done? Or do you still think that aborted missile launch had something to do with the spaceman.. and that Number 9 and 11 were on to something other-worldly or even alternate worldly..?
Beauty is in the eye of the beholder.
As is the Solway Spaceman.