World War I arguably was ignited with an assassination.. World War II was ongoing and the United States was thrown into the nightmare when Japan bombed our fleet at Pearl Harbor..

So what will future generations ponder if history ends up creating a war between rival nations–over Tweets!!?

President Trump warned the Kim Jong UN From North Korea: “North Korean Leader Kim Jong-Un just stated that the ”Nuclear Button is on his desk at all times.” Will someone from his depleted and food starved regime please inform him that I too have a Nuclear Button, but it is a much bigger & more powerful one than his, and my Button works!’

The threat came after an annual speech given by Kim, in which he cautioned: ‘The U.S. should know that the button for nuclear weapons is on my table.’

Kim warned America that it can ‘never start a war against me and our country’ and insisted his nukes are now a reality, not a threat.

The media is in a feeding frenzy over the ‘my button is bigger than your button’ Tweet.. other nations are closely monitoring the ongoing tension and warning of a nightmare scenario should war break out on the peninsula..

Who could have ever predicted a time where a president named Trump issued something called a ‘tweet’ that could ignite a flare up of tensions in a land that has been technically still at ‘war’ for decades..? Not the best psychic in the world could have.. 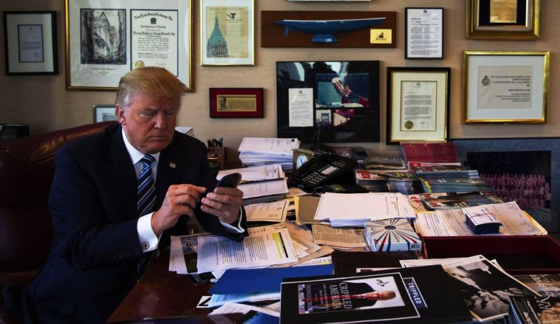