Amazon is buying Whole Foods for $13.4 billion.. And it is about more than just drone deliveries.. it is about the war with Walmart: “Make no mistake, Walmart under no circumstances can lose the grocery wars to Amazon,” said Brittain Ladd, a strategy and supply chain consultant who formerly worked with Amazon on its grocery business. “If Walmart loses the grocery battle to Amazon, they have no chance of ever dethroning Amazon as the largest e-commerce player in the world.”..

Panic!! Warning ussies after dozens of bathgers are attacked by piranhas in Brazil!

Bill Maher: PANIC is the word..

NEW REPUBLIC ponders: What ever happened to the great scary summer horror movie? I wonder the same.. It is what so often seems missing now, the old days of August thrills are replaced by big budget mostly BUSTS.. we need a summer sleeper.. movies like SIGNS.. movies like SIXTH SENSE.. movies like BLAIR WITCH.. movies like JEEPERS CREEPERS. All summer scares.. Halloween 8 was too. We’ll ignore that one.

A mnini review: I wanted to like CARS 3.. so did my son. We both ended up being mostly bored with an audience that seemed the same. The movie became as boring as Owen Wilson’s ‘Lightning McQueen’ voiceover..

The war between Alex Jones and Megyn Kelly is on.. He releases the tapes of the interview promises that were..

When Rhode Island’s teacher of the year posted a photo of his April meeting with President Donald Trump and First Lady Melania at the White House Oval Office Thursday, it quickly went viral. .. MORE: the striking picture shows Nikos Giannopoulos holding a lacy fan and wearing a rainbow pin among other meaningful accessories. Giannopoulos says he picked strategic accessories in order to pay tribute to the LGBTQ community during the photo opportunity with Trump.

HOW MUCH CAN TEMPS DROP DURING A SOLAR ECLIPSE?

On the radar: Kevin Smith shooting a horror moving titled KILLROY WAS HERE.. Some of the filming took place at a Florida college.. 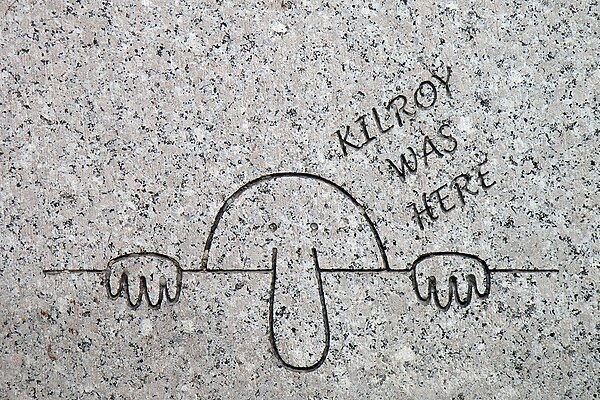 A little bit of history about KILLROY WAS HERE: The phrase “Kilroy Was Here” originated in American culture as graffiti during World War II as a bald-headed man with a big nose peeking over a wall with the fingers of each hand clutching the wall. Smith said the new film will be the first installment of a horror anthology.. Even more: Author Charles Panati says that in the United States “the mischievous face and the phrase became a national joke… The outrageousness of the graffiti was not so much what it said, but where it turned up.”[2] The major Kilroy graffiti fad ended in the 1950s, but today people all over the world still scribble the character and “Kilroy was here” in schools, trains, and other public areas. It is believed that James J. Kilroy was the origin of the expression, as he used the phrase when checking ships at the Fore River Shipyard in Massachusetts during WWII..

Blumhouse released the trailer for Happy Death Day, in which an unfortunate young woman finds herself trapped in a time loop in which she is murdered by a masked assailant.. the star relives the day of her murder with both its unexceptional details and terrifying end until she discovers her killer’s identity… it is being billed as the Groundhog Day of horror movies and is going to be released Friday the 13th in October..

WIKILEAKS founder Julian Assange believes super-powerful Artificial Intelligence is just around the corner and claims he has intel which states humans will soon become immortal by digitizing their brains..

DELETE yourself from the internet with one button..

So THIS is what Spongebob would look like as a human being?

A VIMEO movie ahead of its time: ROBOT and SCARECROW..