Skip to content
Maria made landfall on Dominica, an island of 72,000 people in the Lesser Antilles, at 9:15 p.m. ET, the U.S. National Hurricane Center said. 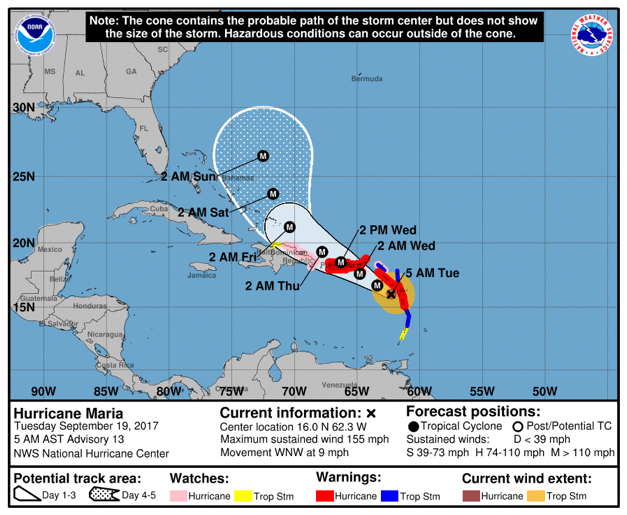 The island’s prime minister, Roosevelt Skerrit, wrote on Facebook that his roof was gone, that his home was flooded and that he was “at the complete mercy of the hurricane.” A few minutes later, he reported that he had been rescued.
“Initial reports are of widespread devastation,” Skerrit said in a later post. “So far we have lost all what money can buy and replace. So far the winds have swept away the roofs of almost every person I have spoken to or otherwise made contact with. The roof to my own official residence was among the first to go and this apparently triggered an avalanche of torn-away roofs in the city and the countryside.” 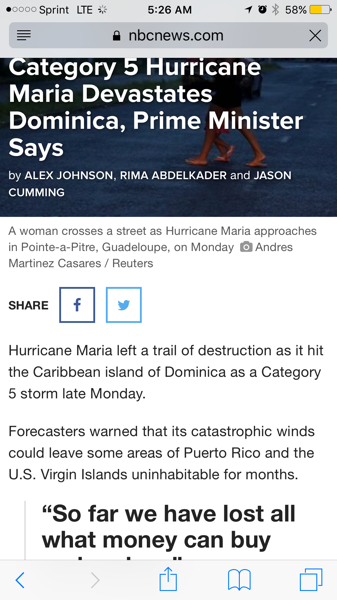 Meanwhile .. the storm is building up strength again and heading for Puerto Rico..

Puerto Rico has imposed a rationing of basic supplies including water and baby formula as Hurricane Maria approaches as a Category 5 storm.

Officials said Monday that the rationing is necessary to ensure everyone has access to basic items such as batteries, milk, canned foods, flashlights and other supplies. It does not apply to gasoline or other fuels.

Shelves at many stores were emptying out quickly as people rushed to finalize hurricane preparations. Many posted desperate pleas on social media for help in finding certain items.

It is truly amazing to see how quickly this storm formed, how fast it turned into a category 4 and then 5.. and how much of an overnight monster-status it has achieved.
At this time, if it stays on course, it will be the strongest storm to hit Puerto Rico since 1928. The vast majority of people alive on the island never saw a storm this strong in their collective lifetimes..