If you never saw the movie called LIFE with Jake Gyllenhaal and Ryan Reynolds, you should. It is about a life form discovered on Mars. The entire world changes.. the space station changes too when the life form begins to rapidly get intelligent and gigantic, devouring astronauts and taking over the vessel..

The horror movie aside, there is something equally strange afoot on the space station. 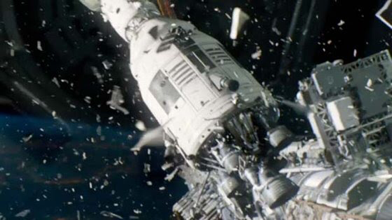 From reporting from  SKY NEWS (http://news.sky.com/story/shape-shifting-bacteria-spotted-on-international-space-station-11033655)

Bacterial cells treated with a common antibiotic have been spotted changing shape to survive while aboard the International Space Station (ISS).

The way bacteria act in near-zero gravity environments could pose a serious problem for treating astronauts with infections.

The “clever shape-shifting” was detected in bacteria being experimented on in the near-weightlessness of space, and is believed to help the bacteria survive.

An experiment on the common E coli bacteria subjected it to different concentrations of the antibiotic gentamicin sulfate, a drug which kills the bug on Earth.