As the Earth Changes.. 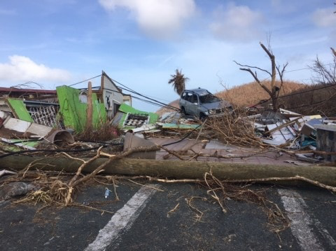 This is reporting from the WASHINGTON POST (https://www.washingtonpost.com/world/after-irma-a-once-lush-gem-in-the-us-virgin-islands-reduced-to-battered-wasteland/2017/09/12/b49532e0-9736-11e7-af6a-6555caaeb8dc_story.html?utm_term=.4b43fb7b69f2) along with a must-read article about the devastation in the wake of Hurricane Irma and the destruction being seen in the islands:

CRUZ BAY, U.S. Virgin Islands — The Asolare restaurant is gone, practically blown off its cliff, along with its world-famous carrot ginger soup. The facade of Margarita Phil’s is a junkyard of yellow and vermilion planks. Multimillion-dollar homes and aluminum huts alike lie in ruins.

On the island of St. John, that was only Irma’s beginning. Once a lush gem in the U.S. Virgin Islands, a chain steeped in the lore of pirates and killer storms, this 20-square-mile island is now perhaps the site of Irma’s worst devastation on American soil.

Six days after the storm — some say several days too late — the island finally has an active-theater disaster zone. Military helicopters buzz overhead and a Navy aircraft carrier is anchored off the coast, as the National Guard patrols the streets.