Reporting from the AP on a developing story..

magnitude 7.1 earthquake jolted central Mexico on Tuesday, collapsing some buildings, cracking the facades of others and scattering rubble on streets on the anniversary of a devastating 1985 quake. 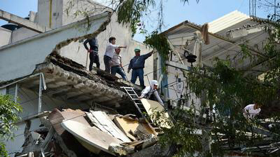 The quake caused buildings to sway sickeningly in Mexico City and sent panicked office workers streaming into the streets, but the full extent of the damage was not yet clear. Mexican media broadcast images of several collapsed buildings in heavily populated parts of the city.

The city was actually drilling for a quake TODAY.. just as the real one struck..