Skip to content
FRIDAY NOVEMBER 8 2013
It has been a long and winding week.. winding down now ..
Fridays come so sudden, though.. It seems that the weekly process of wishing away Monday makes life quickly slip into a fast-motion experience, with the bad flying by but the good also vanishing just as much..
And before you know it? Thanksgiving will have come and gone.. Christmas, too.. It’s all so rushed. So fast. So scary.
And with that, it’s on to the scary news of the day, the moment, the hour.. all unfit to print, and presented in HTML, beamed across the landscape via an internet connection, and landing onto your computer screen, or handheld device, with rapid fire motion.. Read the headlines and weep.
The HORROR REPORT and other media sources have been focusing a great deal on Typhoon Haiyan. This monster killer has now struck the Philippine islands–it may get stronger and deal a blow to China or Vietnam. But in the mean time, it’s impressive to look at some information about how bad the storm was. At one point, Haiyan had gusts as strong as 235 mph! There are power failures and so far three deaths–that number is sadly going to rise, if predictions are true. 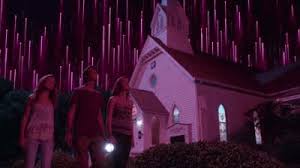 An update from the NEW YORK TIMES on the fireballs above our heads–and how there will be more of them. The pink stars indeed are falling.. Last night,GROUND ZERO with Clyde Lewis had a very listenable program regarding these signs from above.. it’s worth the listen.. Lewis also did his part to try to tie up all those loose ends in news stories recently about how we are ‘due’ for a big one..
Hubble spots a ‘weird and freakish’ asteroid..
The asteroid has SIX TAILS!
A European satellite may fall to earth–but no one is sure where..
Twitter shares on fire on Stock Market.. A bigger IPO than Facebook..
Flash mobs stop dancing.. now they are robbing..

Sleeping stronger photo from NYC subway goes viral..
Renisha McBride shot to death in Detroit because she was going to try to help someone in a car accident..
Obamascare: New documents reveal that the infamous healthcare.gov website was only able to handle 1,100 users during test periods!
For that, and other things, the buck has stopped. And Obama said sorry.
What would the earth look like if all the ice melted? You wouldn’t recognize it..
It’s about time: The FDA is banning trans fats.. Now can they look again at aspartame and perhaps HFCS, or will that take five more decades, too?
Speaking of food, it’s not all bad. As a matter of fact, there are some that refresh the body–and mind..
Monsanto wins the GMO labeling fight again–even though polls *(like in California*) looked like it would go another way.
Billy Graham delivers his last message to America..
Like we didn’t know.. TEPCO now admits that Fukushima radiation is about 95% higher than reported.. Thanks for the honesty, TEPCO.
Things are also going to get a little more dicey as the fuel rod replacement project is about to begin.. And get this: A big quake at Fukushima could force the American west coast to evacuate! That is quite a fearful talking point.. Whether there will be any concrete answers or not, Saturday night’s COAST TO COAST AM with John B Wells may be worth a listen.. It’s a roundtable relating to Fukushima.. I guess that coverage is better than no coverage–and no coverage is exactly what has been happening in the United States media..
NBC’s TODAY show will televise Branson’s first commercial space flight in 2014!
The Virgin Galactic billionaire will have a live performance on TV.. Will it be like the spacewalk in 1969? ….did we really even go to the moon? Let’s no go there.

A winter storm targeting NEW YORK CITY developing for next week. Models are models. I say it’s too soon to tell..

The latest in the Bieber fever world.. Justin had sex with a girl in Brazil, and she snapped his photo to prove it. Apparently he likes to snuggle with his red hate instead of his mate. Just remember, all the world’s a stage. And don’t be Bieber’s pawn–I say this whole photo and story was a set up only to add to the image that Justin Bieber wants people to have .. he’s a star, baby. Don’t belieber any of it.
New information has creationists singing with praise: Man may have formed from clay!
Pittsburgh, PA man, actually thinks he is a dog and only answers to the name ‘Boomer’.. That’s still better than Wolf.
Rob Lowe comments about his portrayal of JFK.. “It’s deep”
AMERICAN HORROR STORY renewed for fourth season on FX..
Marvel gets a Netflix series–and Daredevil, Jessica Jones, Iron Fist and Luke Cage will get their day in the download..
CHRISTMAS 2015 PRESENT: Star Wars: Episode VII finally has an official release date: December 18, 2015..
IF you cannot enjoy horror films, your brain may be keeping you from it..
Ten of the most unconventional horror movie monsters.. And speaking of horror movie monsters that aren’t decorated with gore and face paint, one of my favorite villains ever in a horror flick was the old man from the movie THE CHANGELING. That movie was sad, scary, and disturbing.. It’s worth a watch if you’ve never seen it.

1 thought on “Freaky Friday: All the news and not a drop to drink”